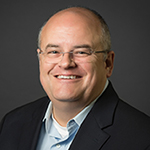 Derek joined iMFLUX in July 2015 after 28 years of operational experience at P&G.  He was previously the VP for Service and Operational Excellence.  During his P&G tenure, Derek was a plant manager at some of P&G’s largest global sites and was responsible for rebuilding the Pringles’ site in Jackson, TN after a 2003 tornado.  Derek has deep supply chain, program management and customer service experience.  He has degrees in both Civil /Geological Engineering from Princeton University.

Do Not Sell My Personal Information